Landscape architect Robert Rock takes pride in talking to his clients to understand just how they’ll be using the green spaces he designs. In his most recent assignment, however, he hit a roadblock.

“You can’t ask elk what they’d like for dinner,” Mr. Rock said ruefully.

The Olin StudioA design from the Olin Studio in Philadelphia would cost about $12 million and span a six-lane highway.

Nor can you ask them what would induce them to nibble that dinner while strolling across a lushly planted footbridge spanning a six-lane highway.

Getting elk to cross highways safelyâ€”and encouraging lynx, bear, deer and bighorn sheep to follow suitâ€”was the key challenge in an unusual global contest that concluded this month.

The ARC International Wildlife Crossing Infrastructure Design Competition asked engineers, ecologists and landscape architects to come up with an overpass bridge for pedestrians of the furry sort. The goal: to encourage wildlife to roam freely across their habitatâ€”even when that habitat is bisected by a highway.

The five finalists, unveiled last week in Denver, designed multimillion-dollar bridges that aimed to tempt animals across with tasty foliage, green valleys, gentle streams and curved walls to block out noise and vibrations from the traffic below. 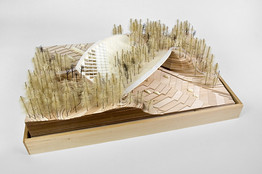 Mr. Rock, who is with Michael Van Valkenburgh Associates in New York, came up with a very wide bridge planted with strips of differing vegetation giving each species its own lane to cross in: pine-tree forest for wildlife that like privacy, such as deer; a section of meadow for animals that prefer more wide-open views.

For his part, David Rubin, a partner at the Olin Studio in Philadelphia, even included a wildlife playground of sorts, made up of toppled tree trunks, to attract the American marten, a beady-eyed weasel with a penchant for scampering among dead wood.

Designing animal crossings is not a new art; in the last decade, they have become common across the U.S. But nearly all the existing crossings are underpassesâ€”tunnels and culverts built underneath roads and out of sight.

Florida, for instance, has built a network of concrete underpasses to ferry panthers safely across roadways. Glacier National Park in Montana boasts a tree-lined underpass for mountain goats. There are tortoise tunnels in California. And the town of Amherst, Mass., guides spotted salamanders, in their annual trek from burrows to breeding ground, through special culverts that protect them from getting squashed.

But though these projects have been successful, some animals, such as elk and deer, find underpasses dark and scary and won’t use them with any regularity, ecologists say. 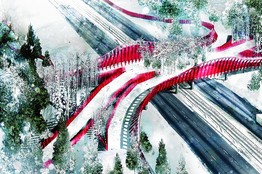 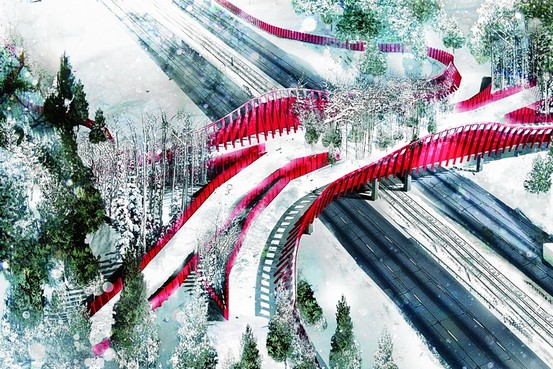 Meanwhile, car-critter collisions in the U.S. are on the rise, according to the Federal Highway Administration. Last year, 182 motorists were killed. The Western Transportation Institute at Montana State University puts the annual cost of such collisions at about $8 billion in medical and repair bills.

Seeking a solution, the institute invited designers from around the world to work up plans for a wildlife overpass bridgeâ€”common in Europe but rare in the U.S. Entrants were asked to design for a specific site, across Interstate 70 near Vail, Colo.

In truth, Colorado has no money to build a high-concept wildlife bridge. And the Vail location isn’t a priority for animal crossings, according to Russell George, executive director of the state Department of Transportation. Organizers picked the site, rather, for its thorny engineering challengesâ€”rough mountain terrain, heavy snow, six lanes of traffic plus bike lanes. Any design that would work there could be easily modified for other sites, they figured.

Organizers envision wildlife bridges built across prominent highways throughout the nation. Contest manager Rob Ament says the striking structures could become instant icons, symbols of the need for man to share the landscape with animals.

The trouble is, iconic bridges are pricey. One team that made it into the final round has estimated its span would cost $12 million. Another said it hoped to keep construction costs under $10 million. By contrast, a run-of-the-mill underpass might cost anywhere from $100,000 to a few million, depending on size and complexity.

The contest winner, who will earn a $40,000 prize, will be announced in January at a national meeting of transportation officials.

Trisha White, a director of the conservation group Defenders of Wildlife, says those officials must do more than ooh and aah over the entries; she would like them to work on keeping highways out of habitat in the first place.

Wildlife bridges are fine where habitat is irreversibly fragmented, Ms. White says, but “the bigger issue is those future roads….Can we please make better decisions on where to put them?”

Write to Stephanie Simon at stephanie.simon@wsj.com

This entry was posted in Uncategorized. Bookmark the permalink.

Manage Cookie Consent
To provide the best experiences, we use technologies like cookies to store and/or access device information. Consenting to these technologies will allow us to process data such as browsing behavior or unique IDs on this site. Not consenting or withdrawing consent, may adversely affect certain features and functions.
Manage options Manage services Manage vendors Read more about these purposes
View preferences
{title} {title} {title}